Russian ‘щ‘ can sound a whole lot like ‘ш‘ to the untrained, newbie ear! It is important to pronounce them both correctly, because they are both unique sounds! 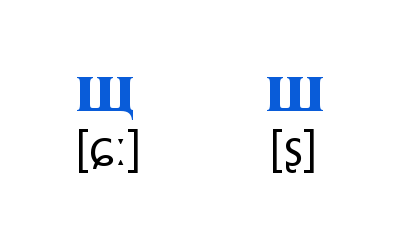 Some resources will tell you that ‘щ‘ is pronounced as “shch”, as in “fresh cheese.” This is not correct in modern Standard Russian! Although Russian words with ‘щ‘ are transcribed as “shch” or “sch” (e.g. борщ = borsch), the pronounciation is [ɕː] nowadays. It is basically a long, palatalized version of English’s “sh” as in “ship.”

In the Polish language, this sound is still “shch”, transcribed as [ʂt͡ʂ] in IPA and written as ‘szcz.’

‘щ‘ is a voiceless alveolo-palatal fricative. It is a postalveolar fricative (like the ‘sh’ in English “ship”), but it is palatalized, meaning that the middle of the tongue is raised towards the hard palate (thus it is a soft consonant). The only catch is that it is longer than other consonants, much like pronouncing two: [ɕɕ].

If you are accustomed to the other soft consonants in Russian (like ‘ть’, ‘сь’, ‘нь’), then ‘щ‘ shouldn’t be very hard for you. Simply palatalize your English ‘sh’ and make it longer!

Here are some example words for you to study. Try to notice the difference between ‘ш‘ and ‘щ.’